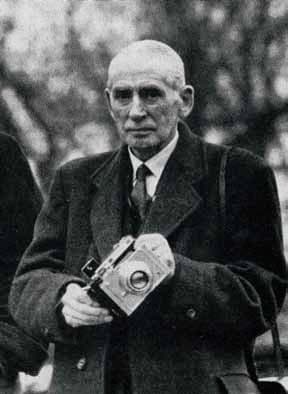 Continuing the theme of notable names in the profession of medical photography, this piece is about Norman Kingsley Harrison and I am indebted once again to Ray Lunnon for his assistance.

Originally, Norman Harrison was a Press Photographer in London. The photograph (above) was probably taken during his time in this role and some readers may be able to identify the camera he is holding. During the Second World War he worked in the City and it is believed that he was sent to St Bartholomew’s Hospital to record either bomb damage, public hospital activities or, possibly, injuries sustained during the Blitz. After the end of the war he was invited to form, or take charge of, the Medical Photographic Department there, which was a new venture by the hospital.

Norman went on to be a stalwart in the foundation of the new medical photographic establishment, being involved in the very early days of both the Royal Photographic Society Medical Group and the Medical Committee of the (then) Institute of British Photographers. In 1951 he became involved in the establishment of the London School of Medical Photography and, from its inception, was Honorary Secretary until his retirement.

One of Norman’s greatest contribution to medical photography was in acting as the profession’s ‘publicity agent’. For many years he reported extensively in the British Journal of Photography on the various activities of groups, departments, individuals, equipment and new technical developments. He also wrote about the activities of various meetings and conferences in his regular column entitled ‘Mediphote’ – a publication which could be read nationwide promoting the ethos of this new profession.

Norman Harrison died, aged 79, at his home in Clacton-on-Sea in August 1971. The following year, what was then the Institute of Medical & Biological Illustration (IMBI), now the Institute of Medical Illustrators (IMI), initiated the Norman K Harrison medal. This is an award given by the Institute’s Chairman to someone of his or her choice and is generally given to acknowledge an outstanding contribution to the profession as a whole or to that Chairman in particular, or for a specific endeavour. The first recipient was the late Julie Dorrington and the award was given by Gabriel Donald. The full list of Harrison recipients can be found on the IMI site.

I was honoured to receive this award in 2002 from Carol Fleming and the medal is shown here. 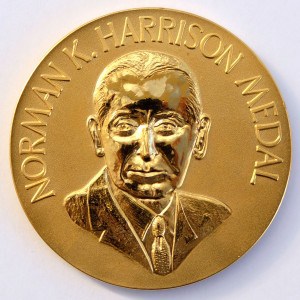